Who we lost KY - John and me: story about John Haponik

WUKY is collaborating with Martha Greenwald, creator and curator of 'Who We Lost KY' a writing project where friends and families who have lost loved ones to the pandemic pay tribute and in some cases, say their final goodbyes. Today we have an essay written by Darlene Haponik of Pulaski County about John, her husband of 37 years. The reader is Donna Jo Thorndale.

Thirty-seven years is a long time, and yet not nearly enough. I thought I was looking for something to read when I went into the bookstore at the Paducah Mall. Instead, I found the love of my life.

I nearly lost him twice. The first time when he was working as a contract chemical engineer in Baton Rouge, LA, living out of a hotel room when he came down with a mystery illness. The ER in Louisiana was no help; they acted like they thought he was a pill seeker. He had a terrible headache, and when he was able to drive, he packed up his things and came home to me. Four months, five doctors, seven spinal taps and dozens of tests and we finally had the diagnosis of Cryptococcus Neoformans; Fungal Meningitis. He lost sight in one eye became deaf in one ear and had only partial hearing in the other, but he was still my John and we managed just fine, though with a bit more yelling. I stayed with him for weeks in the hospital, even sleeping in the bed with him. His doctor would peek around the door before coming in of a morning, “good morning, love-birds,” he would say. We were stronger together, and nothing could come between us.

That disease is 100% fatal without treatment and the only treatment at that time was a drug called Amphoterison B. If you watched House on tv, you will remember they called it “Amphi-terrible” because it is so hard on the body. Two weeks inpatient and six weeks outpatient IV treatment with Amphi-terrible and he was finally pronounced ‘cured’. Once his doctor cleared him to drive, the first thing he did was go fishing at Kentucky Lake, where he cast off his wedding ring. He had lost so much weight it just went flying off into the water. I bought him another on Ebay. This one is plain gold and has two sets of initials in it with the date “14-11-36” which we teased was our new anniversary. I’m wearing it now.

Well, two years after being cured of fungal meningitis, we had moved to Robinson IL where John worked at Marathon Petroleum. He fell ill again. I gave him a couple of aspirin and we went to a local doctor who turned out to be a terrible diagnostician. Two visits to this guy without any results and I finally gave up and took John to the ER where he is diagnosed with “heart failure, liver failure, kidney failure…” The aspirin probably saved his life, the ER doctor said. After John got stabilized at the small hospital they moved him by ambulance to a larger one in Terra Haute IN. A week in Terra Haute, and they send him to a much bigger hospital in Indianapolis for heart surgery. His surgeon, Dr. Hormuth, says that only maybe 2 of 10 heart surgeons would operate on a person as sick as John. Dr. Hormuth has a huge ego, but when you routinely and literally hold someone’s life in your hands, you can be justified thinking you are God’s gift. He plays in a jazz band after hours too, and you have to love that. I stayed with John in the Cardiac ICU till a grumpy night nurse told me to leave. After I left, John’s stats went a bit bonkers and he kept that nurse busy trying to make him comfortable. After a while she asked him if he wanted her to go find me. “No,” he said, “but maybe you’ll let her stay tomorrow.” She did.

These last 12 years here in Somerset have been pretty good, for the most part. Our kids, Stacy and Michael, have both grown up. Stacy always felt like more of a ‘northerner’ than a ‘southerner’ and now lives in Connecticut. Michael is still at home and has been a blessing to me these last few months since John died. They are both a wreck, missing their dad. Me too. It occurs to me that I have loved John for 37 years, and that is a long time, more than half my life. Stacy and Michael have loved him their entire lives. He was a great dad…. and an even better friend and husband.

I caught Covid at work. Before I knew I had it, I had given it to my son, Michael and my husband, John. My positive test was on the Monday after Christmas. Michael and I recovered. By the following Monday, John was in London at St. Josephs Hospital. His doctors said he was there in plenty of time. He was on ‘room’ air for a week, then moved to a different floor where he could have ‘high’ air. They did the drug treatment and the antibodies and at first expected him to be home by Saturday. I wasn’t allowed to stay with him, of course, but had his phone and we texted back and forth.

This is all too hard to write. At the end of his second week, he was placed on a c-pap. His lungs had filled with sepsis and blood clots. They had to turn the pressure up enough to force the oxygen into his struggling lungs. He developed a pneumothorax- a hole in his lung- from the pressure. He said it felt like a panic attack and it seemed like the whole floor of nurses dashed in to take care of him. That was the day he texted our daughter Stacy, “It is mostly boring here, but sometimes very exciting.” After that he was placed on a ventilator. Before they sedated him, he wrote out, “Darlene, I love you. JPH” on a sheet of paper the nurse gave him. I had it framed so he can tell me he loves me every day.

You can only stay so long on a ventilator before it starts working against you. He couldn’t get a tracheotomy because of the tube coming out of his lung; he was too medically fragile for surgery. His doctor explained that no surgeon would agree to surgery if the patient would die on the table, as they were certain John would.His last week in ICU they finally let Michael and me visit for a while. I realize what a blessing this was… most people did not get the chance to sit with their loved ones since Covid. I thank the doctors and nurses at St. Joseph for that privilege. John was heavily sedated and didn’t know we were there. I wanted to climb in bed with him and hold him, but had to settle for hugging him around all his tubes. A priest gave him last rites for the Catholic Church on our 37th wedding anniversary. I refused to take him off the ventilator on that day, but came back to the hospital on the next. His nurse told me that all the nurses who had taken care of him were crying and upset that they hadn’t been able to save him. I said, “he must have been a good patient” … and she said, “That’s not it. We are all upset because he loves you so much and was so worried about you.”

I left the room while they disconnected the tubes and equipment. When I came back, I held his hand hugged him while he took his last breaths. He just stopped breathing. No struggle. Just peaceful rest. His heart kept beating, his pacemaker doing its duty even after his lungs could not. His nurse used a magnet to quiet the device… and my John was gone.

Tags
WUKY In Depth Who We Lost Ky. 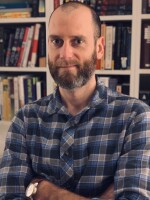